For betting and raising a few different variations are possible. No Limit, as in No Limit Texas Hold’em, is one of the options. In most cases this variation is shortened to Texas Hold’em. But there are endless possibilities. Below is a list with a short explanation of the betting options.

Simply put there’s no limit on the stakes when you play No Limit. There is however a minimum of 1bb (Big Blind) or the double of the raise before you. There’s no maximum meaning you can always go all-in, no matter how many chips you have. No Limit is without a doubt the most played variation in Texas Hold’em. In some other game variations another form of betting is picked.

We use Pot Limit as a form of betting in Texas Hold’em as well, but a lot less than No Limit. In Omaha, a game format with 4 cards per player in hand, this betting form is the norm.

In Pot Limit your bets or raises are bound to a maximum. That maximum equals to the pot. In case there is € 50 in the pot, you can bet/raise for a maximum of € 50. In Pot Limit it’s not allowed to go all-in when you play more than the pot. In Omaha you mostly play Pot Limit because this guarantees the  playability of the game. You can’t just go all-in whenever you have a good hand. This way you get to see the Flop more often and not only the players with the best hand are in.

To calculate the pot you count everything on the table. All bets are counted, including your own bet. Then you raise this amount. 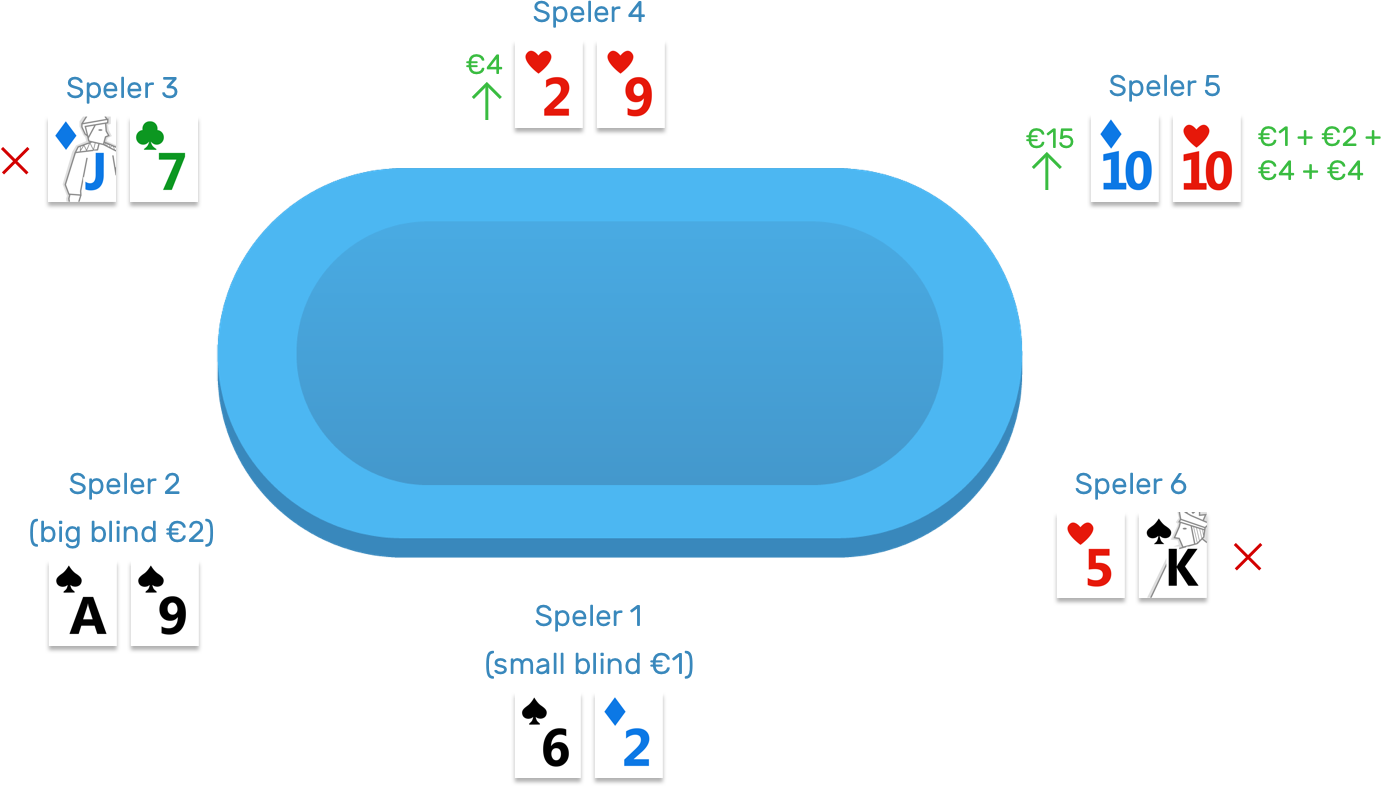 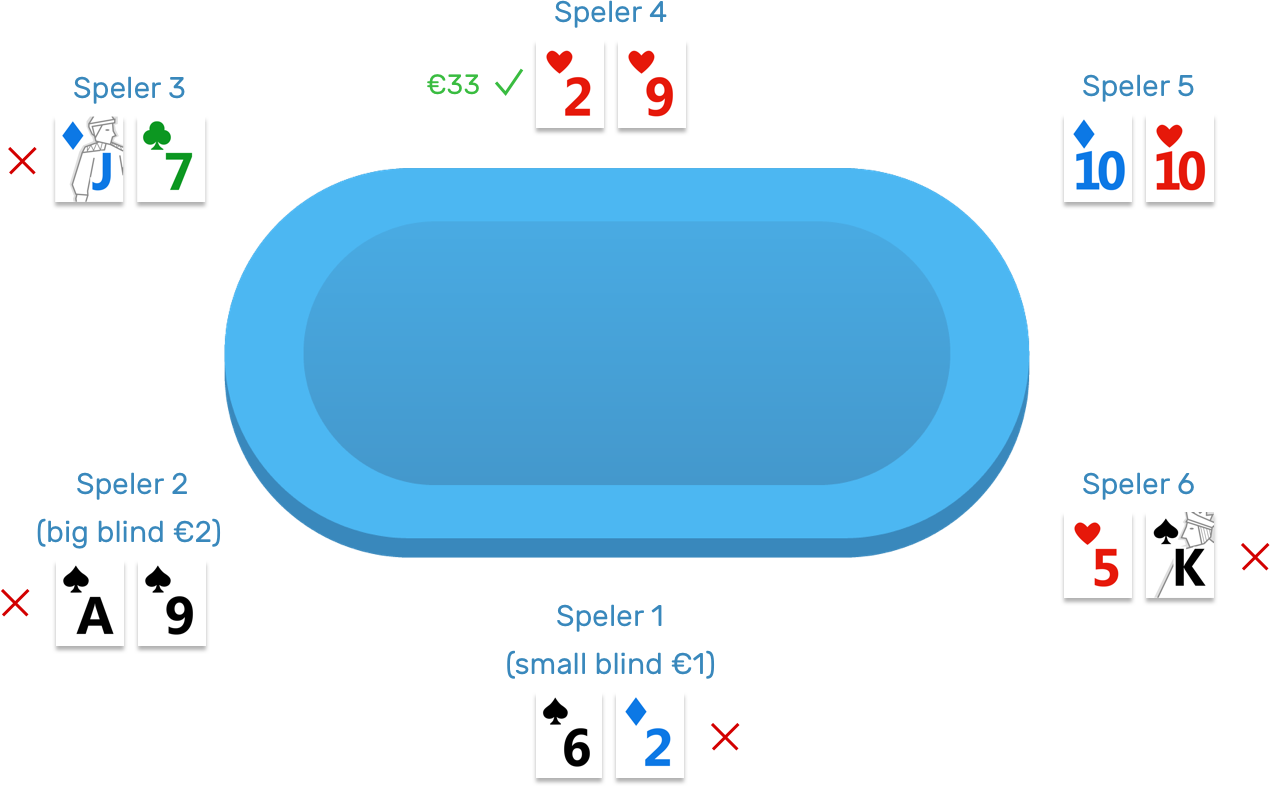 After the flop the maximum bet is € 33. By betting and raising this maximum can go up.

Next to No Limit and Pot Limit we also have the Limit variation. This betting form mostly appears in other poker games such as mixed games. In mixed games different games are played together. In Limit betting the allowed amounts to bet or raise are fixed.

When you take a look at Texas Hold’em for example you are only allowed before the flop and on the flop a maximum of 1 big blind raise. On the turn and river you can raise the double: so per 2 big blinds. 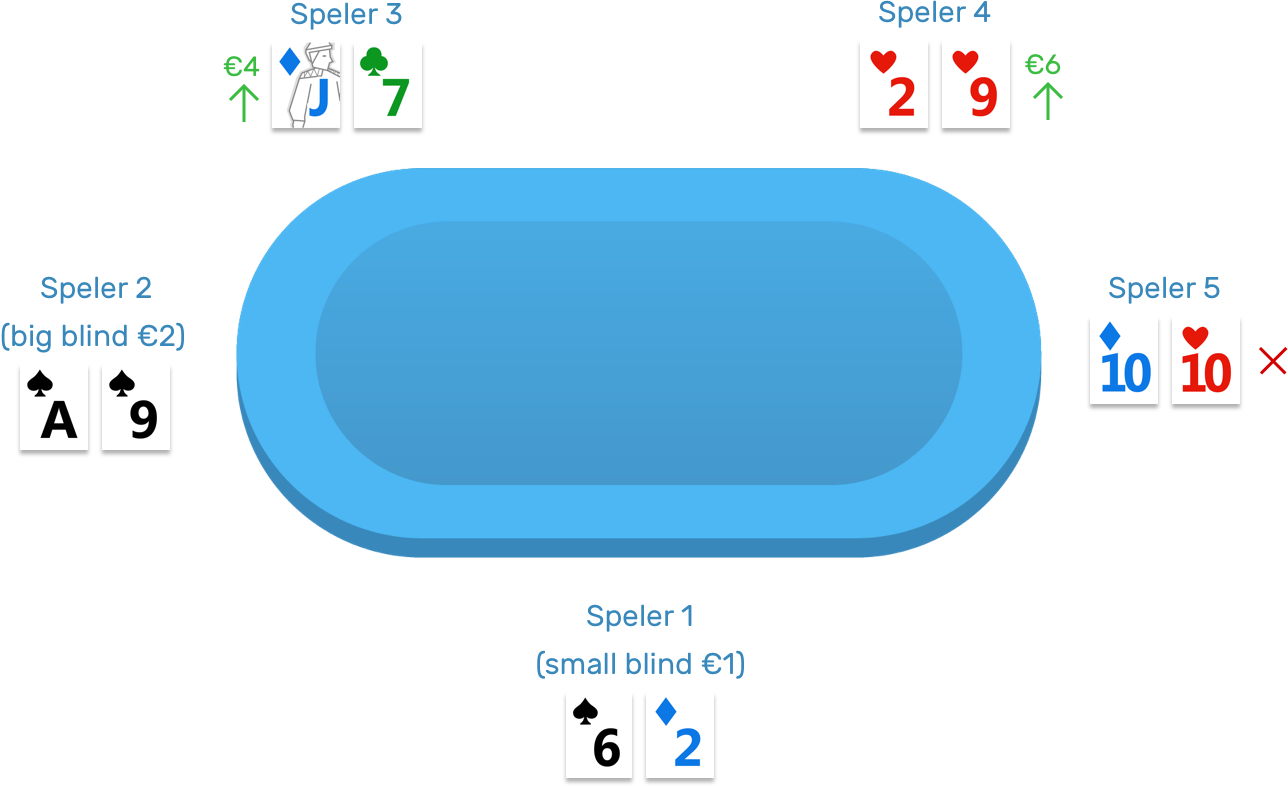 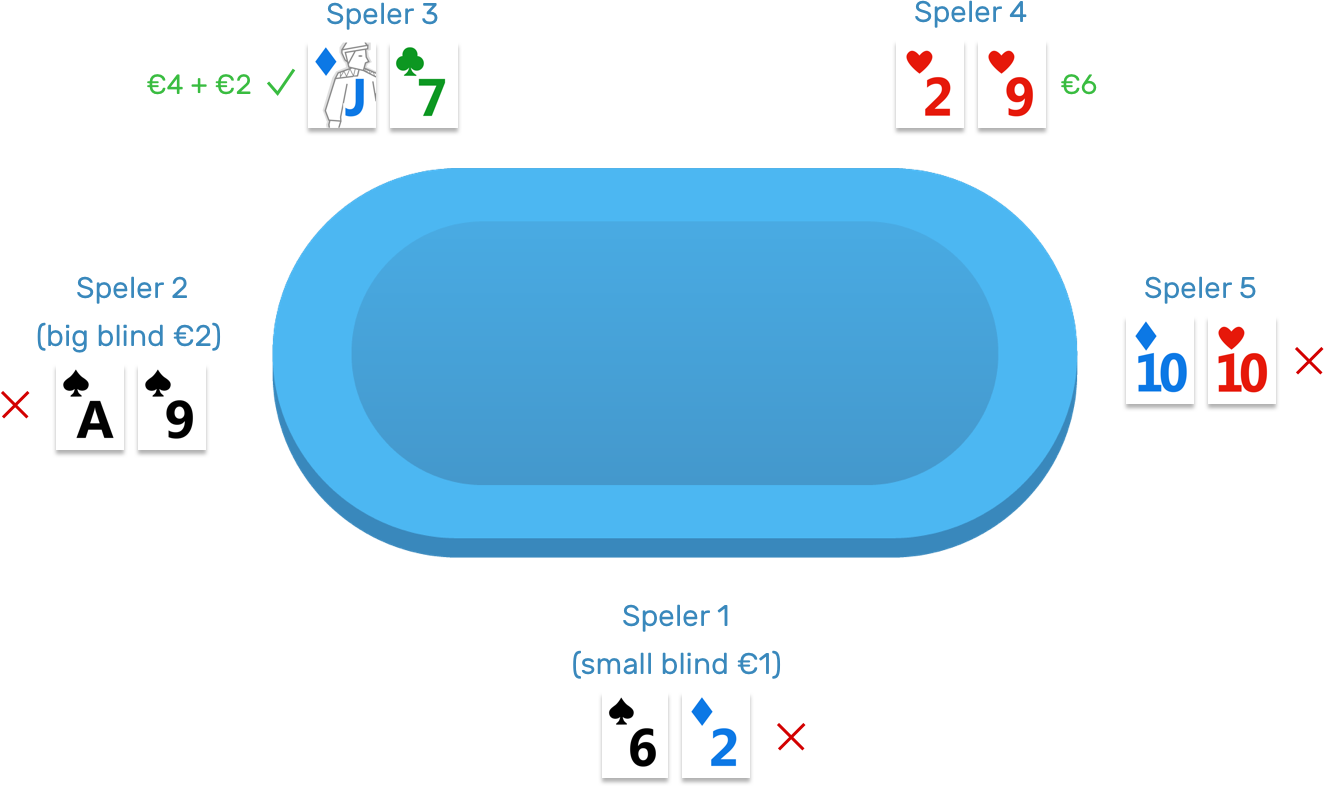 Limit on number of raises

Often there is a limit on the number of raises that you can make. In most cases this means that a bet plus 3 raises can be made. After that only calling or folding is allowed.

2 other betting concepts are an all-in bet and a side pot.

If a player bets all his remaining chips he’s all-in. He can’t lose more chips than the ones on the table. On top of that he can’t win any more than the ones he put on the table. As soon as a player is all-in and another player has paid a showdown happens. The two (or more) players that are all-in show their hands after the river is on the table. In a tournament the hands have to be shown face-up. In a cash game players can throw away their cards face-down if they want. When the latter is done, the player gives up the pot, unless his opponent has also thrown away his cards. 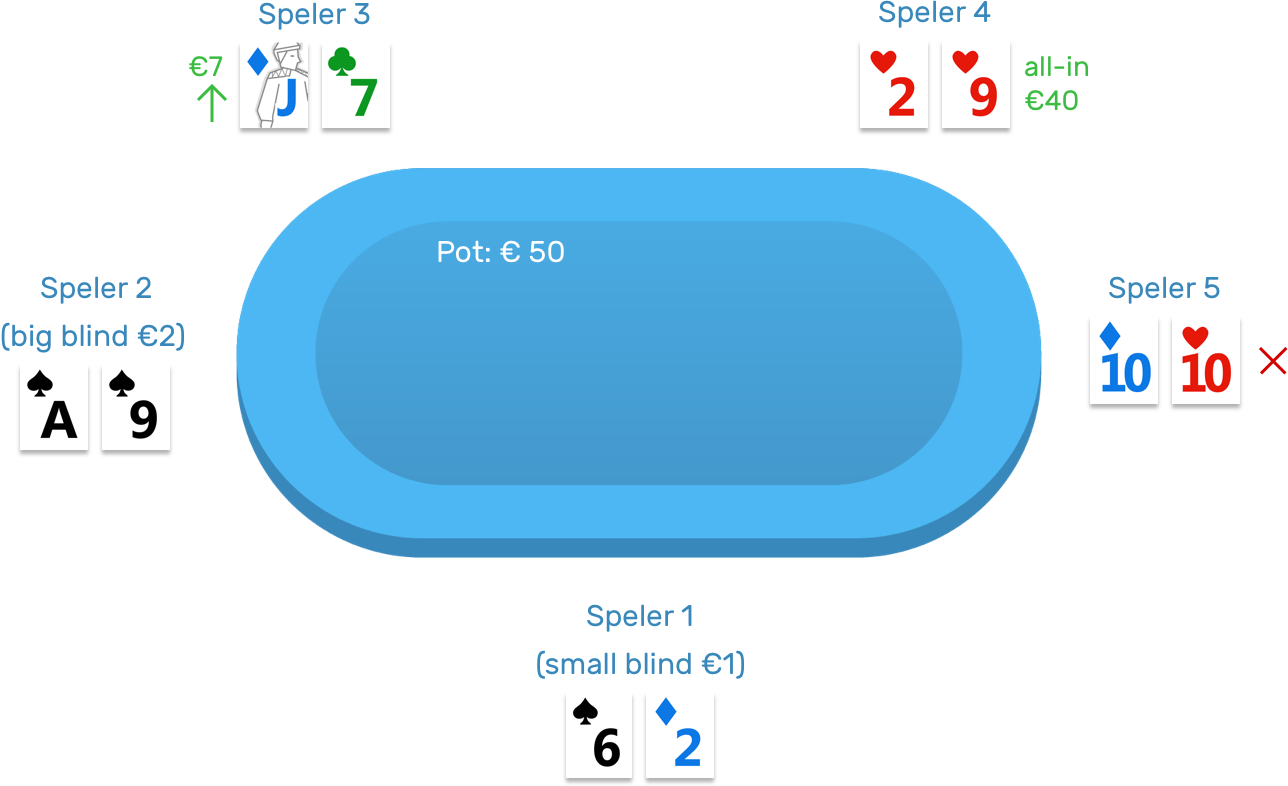 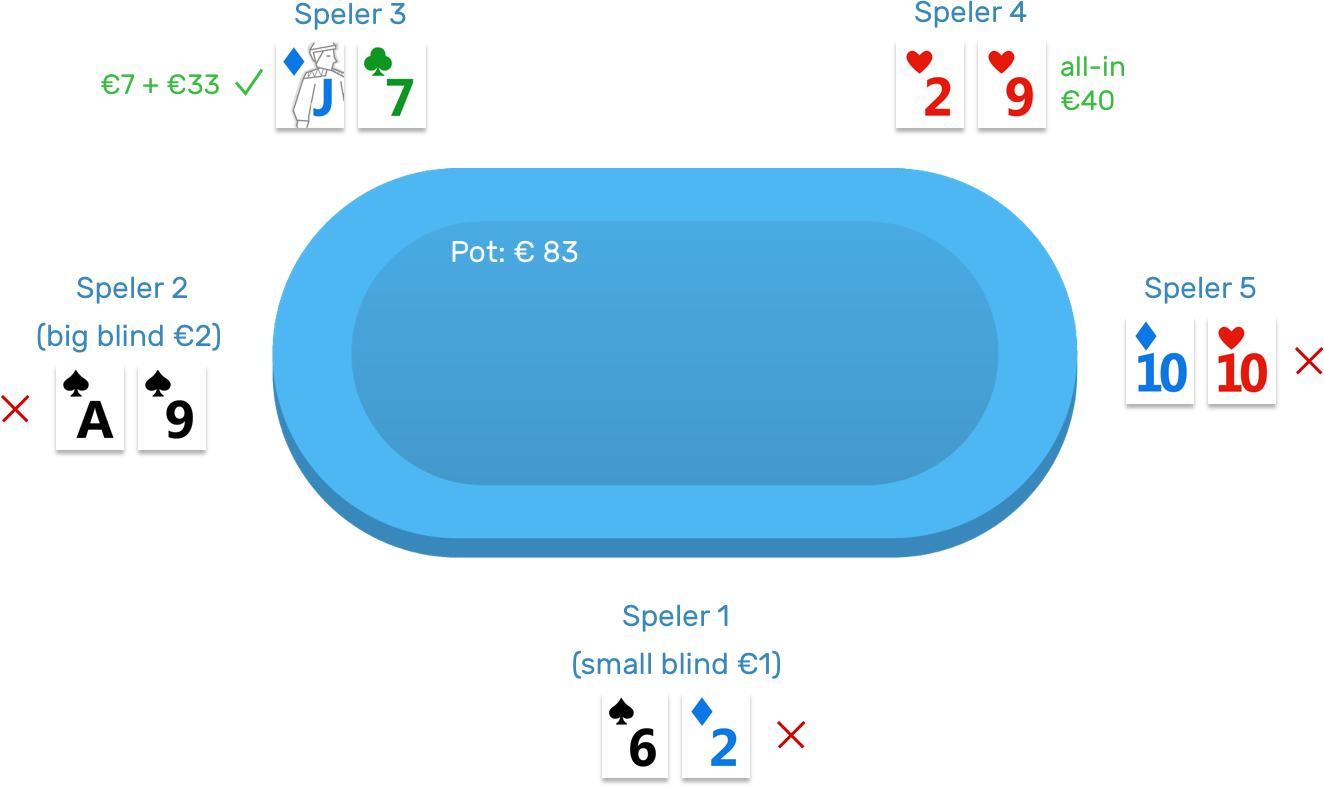 The pot totals to € 83. The flop, turn and river are turned without making any further bets. After the river player 4 has to show his cards first (if he wants to win the pot). If player 4 shows his cards, player 3 has to show a better hand in order to claim the pot.

If a player is all-in and multiple players remain a side pot can occur. The player that is all-in can’t win more than his own all-in from the other players. The other players, on the other hand, can bet among themselves. Those bets lead to a side pot. At the end of the hand the side pot is calculated first, after that the main pot. 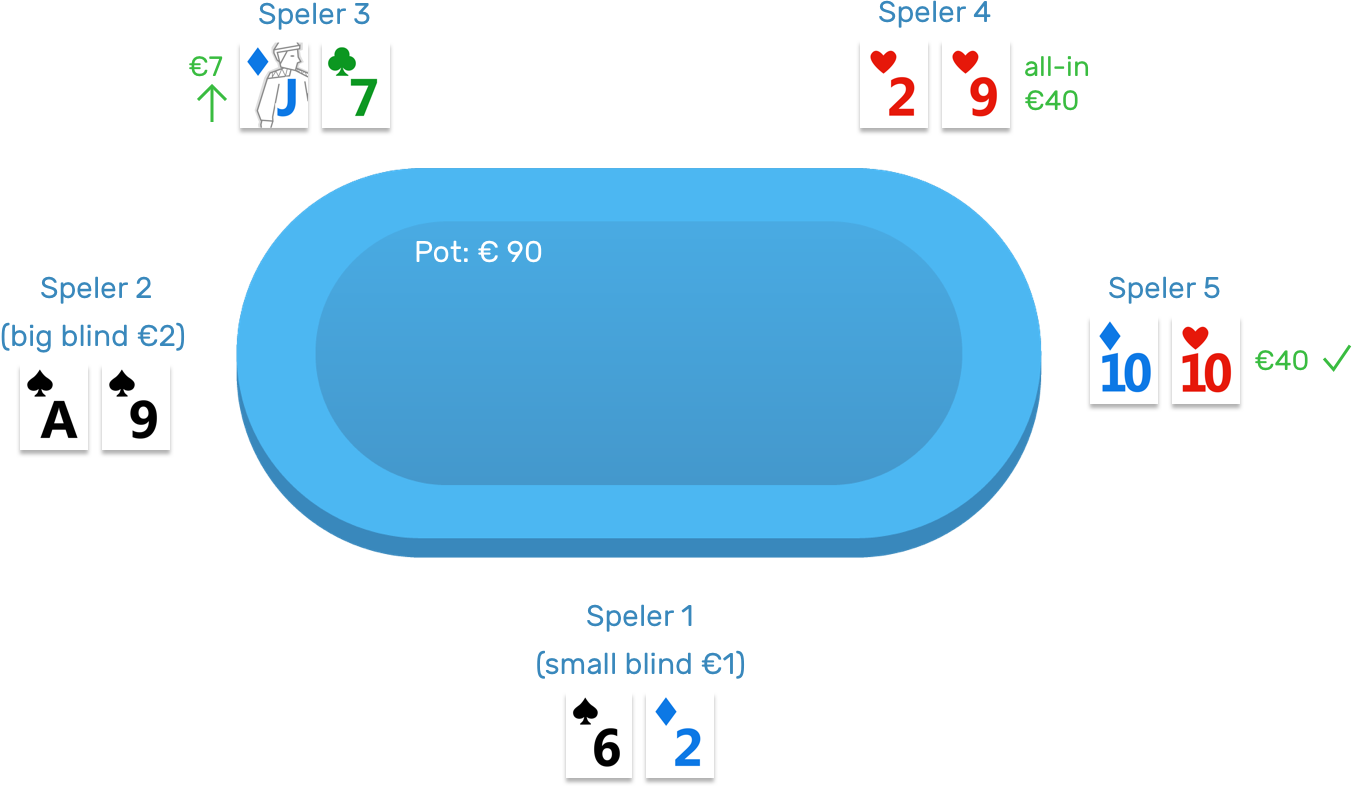 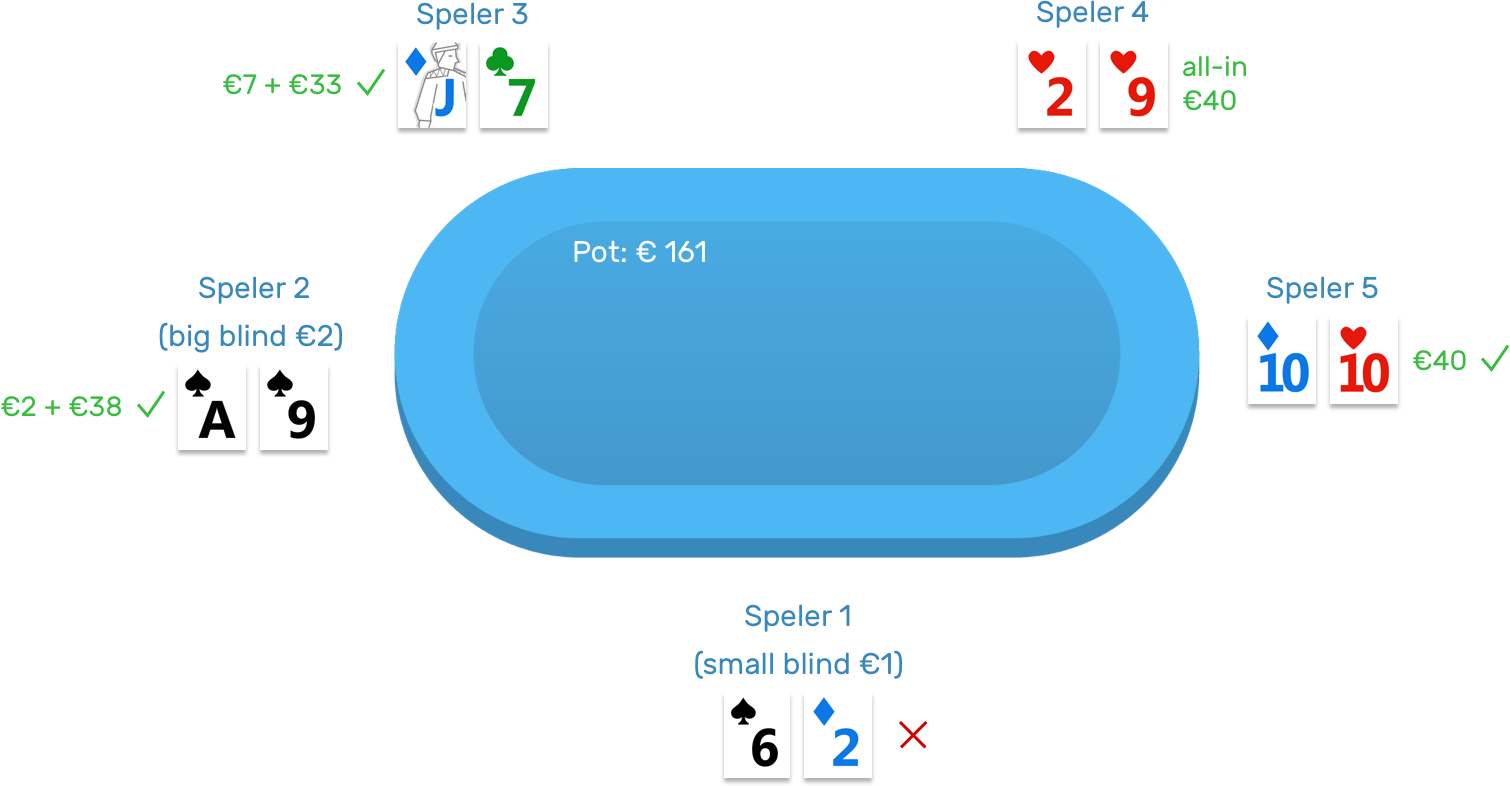 The pot consists of € 161 in total. This is the main pot for which all players qualify (except player 1 who already folded his cards). 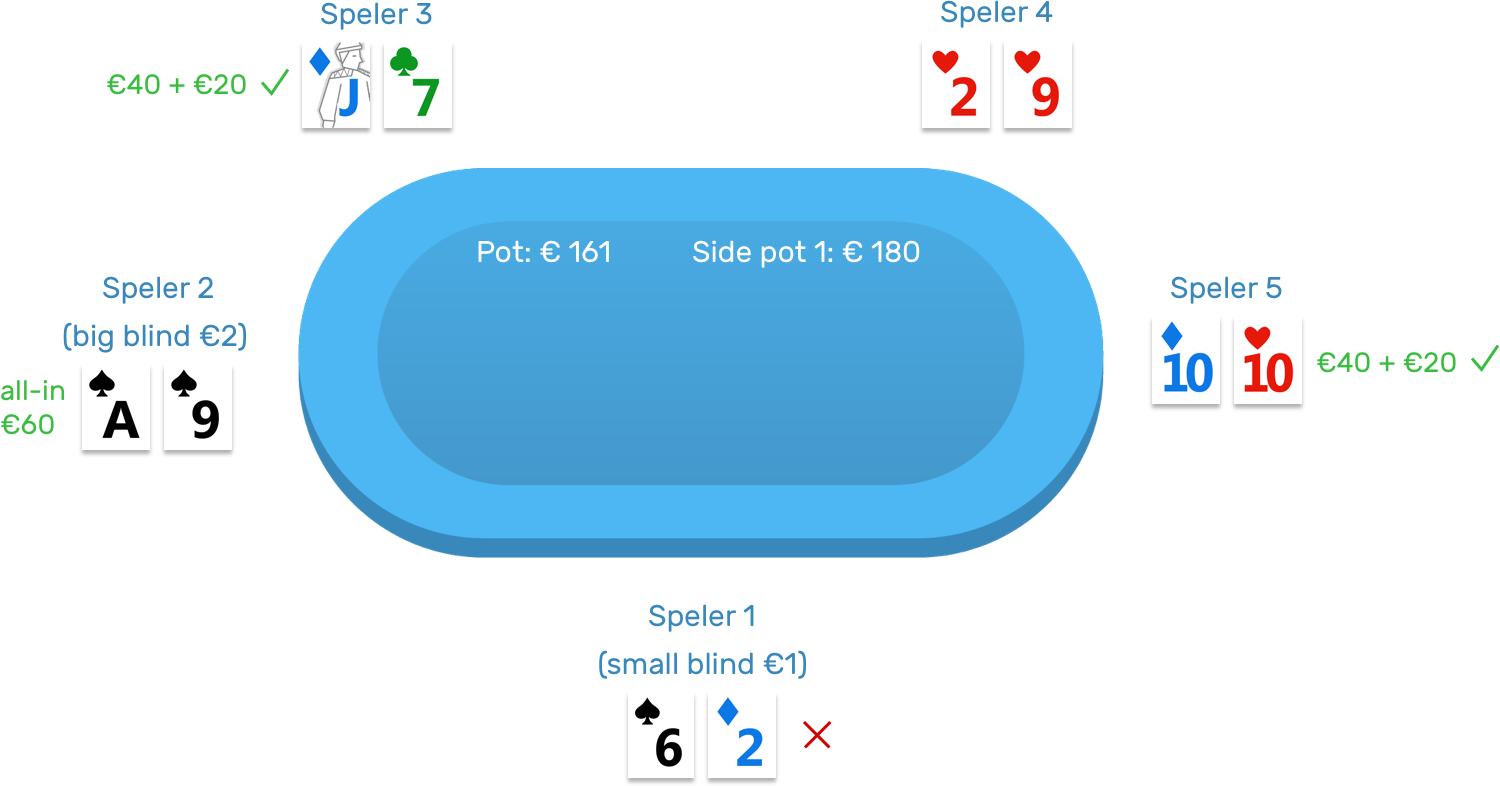 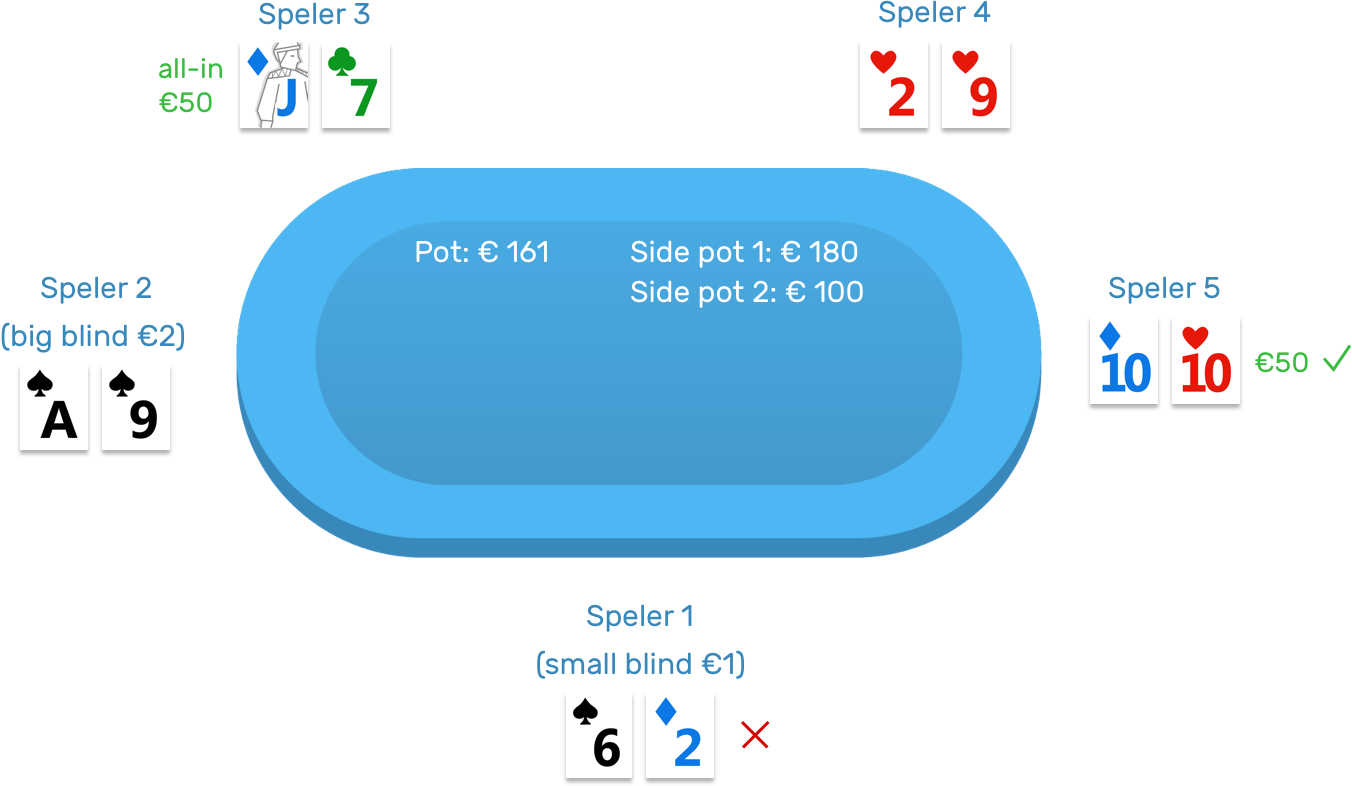 This creates a second side pot of € 100 for which players 3 and 5 qualify.

In a tournament the hands are now shown, in a cash game this is not necessary.
The river is turned. First we take a look at the second side pot of 100 euros. We compare the hands of players 3 and 5. The strongest hand wins this side pot.

Finally we take into account the main pot for which player 4 qualifies as well. The hands of players 2, 3, 4 and 5 are compared. The best poker combination wins.

In other words: it is perfectly possible to have more than one side pot. It’s even possible for all different side (and main) pots to have a separate winner. But it’s also perfectly possible that one player wins all pots. (Only when that player qualifies for all pots of course.)

Is it your dream to become the next poker champion? We provide free tutorials for becoming a Chinese Poker professional. Read our 12 classes, it only takes 5 minutes per class. Put the theory into practice by playing directly in our Days of Poker app. Have fun!